The Useful Native Plants Walk starts beside the Education Building and follows the path eastwards, towards Victoria Street. It returns along the footpath on Edgar Street. Look for the small timber name signs to identify the plants. Many of the trees are mature now, but we are still adding new understorey plants which are not named yet.

(The big trees along Victoria Street are tamarinds, Tamarindus indica, not native to Brisbane.)

A small tree to medium tree with distinctive pink new growth. The plant is a popular garden or street specimen. Edible coral coloured fruit is used in jams and sauces or can be eaten fresh.
Wikipedia link 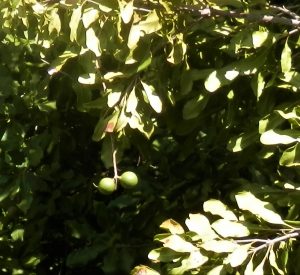 A medium sized tree with leathery leaves and racemes of white flowers. The nuts are within a hard, woody shell. Macadamia is widely grown commercially for the edible nuts. Eat the nuts fresh, roasted or extract oil.
Wikipedia link

A very large, fast-growing tree with hard shelled nuts. The plant is widespread throughout the Asia-Pacific region and has been used by humans since neolithic times. The nuts can be eaten once cooked. The nuts are rich in oil and can be burned as a ‘candle’. The extracted oil is used in cosmetics and the bark can be used as dye. It is the state tree of Hawaii.
Wikipedia link

A large tree with compound leaves. Distinctive hairy seed capsules split into 3 sections, each containing a small black seed. The hairs on the seed capsules irritate the skin. The bark and leaves were traditionally used as a fish poison. Butterfly host plant and attracts birds.
Wikipedia link

A tall rainforest tree with large pinnate leaves. Fruit is edible fresh after allowing it to soften, or in jams or drinks. The fruit is popular with many birds.

A small tree with distinctive stilt roots and spirally arranged spiky leaves. The fruit resembles a woody cone, and the seeds can be ground into flour. The leaves are used for fibre, and in weaving hats and baskets.
Wikipedia link

A small clumping perennial with strappy leaves. It is widely used in landscaping. The seeds are ground into flour and the bases of the leaves are edible. The mature leaves are used in basket weaving.
Wikipedia link

A medium sized tree with distinctive large round leaves. One of its common names is Parasol leaf Tree. It is a fast-growing pioneer plant useful in bush regeneration. The timber was traditionally used for firewood and small furniture.

A small shrub or tree, popular as a garden plant, that can be pruned to form a hedge. It has decorative white flowers in spring and early summer. The narrow leaves smell strongly of lemon. The leaves can be mixed with black tea to make a lemon tea. Aromatic oils are extracted from the leaves and used in cosmetics and to scent soaps or candles.
Wikipedia link 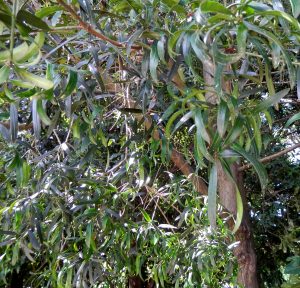 A medium to large rainforest conifer that doesn’t form cones. Members of this genus appear as fossils from the Triassic period, so it could have been dinosaur food! It has edible dark purple fruit, which is a swollen stem with the seed protruding from it. The fruit is good for jams & preserves. The timber is called Brown Pine. It has a very fine straight grain, so it has been used for violin cases and piano keys as well as for furniture and flooring.
Wikipedia link 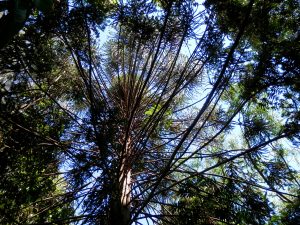 This very large coniferous tree has spiky leaves and a distinctive domed crown shape when it is mature. It bears large cones containing the edible seed or ‘nut’. The nuts are boiled, roasted or ground into flour. First Nations people used to gather from long distances for bunya festivals when the nuts were in season and are still holding festivals today. The timber is used in cabinetmaking and for guitars.
Wikipedia link

A large rainforest tree with distinctive pale undersides to the leaves. The leaves were used as soap substitute and as fish poison. The leaves are food for some butterfly caterpillars. The timber is used in cabinet making.
Wikipedia link

Also known as Kurrajong, this tree has bright red bell-shaped flowers which cover the tree while it is leafless in late Spring. It has deeply-lobed leaves. Edible seed is contained in a pod and is covered with sticky irritant hairs. The seed is toasted and the hairs rubbed off before eating.
Wikipedia link

The tree grows beside creeks or in swamps throughout Eastern Australia. There are male and female trees, the females bearing small rounded cones. Used in agroforestry around the world as a wind break and a nitrogen-fixer. The dense wood is good firewood and is also used as furniture timber.
Wikipedia link

A medium sized tree with glossy dark green compound leaves. The purple fruit are edible once further ripened after picking them. The fruit is used in jams and sauces. The timber is used in wood-turning when available.
Wikipedia link

A large tree with a fluted trunk when the tree is mature. The black edible fruit is used for jams or eaten fresh. The tree was harvested for timber in the past.
Wikipedia link

This small rainforest tree has distinctive pink new growth and pink to red fruit. The fruit used in jams or eaten fresh. The plant has many cultivars used in landscaping, especially for hedges.
Wikipedia link

A medium sized tree with thick papery bark and while bottlebrush flowers. It prefers swampy soil and is usually found in wetlands. Medicinal oil is extracted from the leaves. The bark was traditionally used for coolamons and wrapping food.
Wikipedia link

A large tree with knobbly bark that can grow in dry areas. Leaves are lobed, and the shape resembles bat’s wings. Red pea-shaped flowers appear while the tree is leafless in late winter followed by poisonous bean like seeds. The roots are edible. The timber is used for carving and traditionally for weapons and shields.
Wikipedia link

A medium sized subtropical rainforest tree which is an endangered species. It has large leaves which are glossy on the upper surface, and small brownish flowers. The sour fruit with a red, edible aril, is used in jams, drinks and sauces.
Wikipedia link

This large tree with a buttressed trunk is also known as gympie. Avoid touching the leaves or twigs as they’re covered in stinging hairs. It bears edible, white fruit which are also attractive to birds. The bark fiber was traditionally used to make string.

A small to medium rainforest tree or shrub with shiny leaves. It is native to south-east Queensland and an endangered species. It is also known as shiny-leaved coondoo. Dark purple to black edible fruit can be found all year round.
Wikipedia link

A small tree with white scented flowers and strongly lemon-scented leaves. The leaves are used fresh or dried as tea or flavouring. Oil is extracted from the leaves and used in cosmetics and cleaning products.
Wikipedia link

A small tree or shrub that is hardy. Rough leaves were traditionally used for smoothing timber and medicinally. The fruit is edible when fully ripe and black. The fruit attracts birds and butterflies. Traditionally, string was made from the bark.
Wikipedia link

A medium sized deciduous tree native to Australasia and south-east Asia. Scented lilac flowers are followed by yellow fruit containing poisonous seeds. The seeds were used as beads, and the leaves and bark were traditionally used as fish poison. The leaves can also be used as fodder. It is mainly grown as a timber tree.
Wikipedia link

This small tree is found in coastal areas or close to water. The edible hibiscus-like flowers last for one day. The young shoots are also edible. It has large heart-shaped leaves. The timber is used for carving and furniture, the bark to make rope.

A tall tree with large pinnate leaves, which often grows along stream banks in Brisbane. Red and yellow pea-shaped flowers are followed by a large woody pod containing 3 to 5 poisonous seeds. Seed was traditionally ground into flour and then processed in running water for days to remove toxins. The timber is called Black Bean and used for furniture or carving.
Wikipedia link