You are here: Home / Farming / Growing microgreens at home

In recent years microgreens have moved from the fancy plates of high-end restaurants to the garages and greenhouses of gardeners around the world. These little greens have made their way into the hearts, and into the regular diets, of millions of people. They are versatile and relatively easy to grow. With a quick turnaround time and small space requirement, they have become a go to crop for small market growers everywhere. I started growing microgreens to supplement my market garden income. It proved such a great business I made the business decision to cease the market garden and concentrate on just microgreens. Such is their economic potential. However, most people should be able to grow microgreens at home with few problems. With a small amount of practice and patience, the correct seed choice and irrigation techniques,  you will be on your way to enjoying fresh home grown greens. 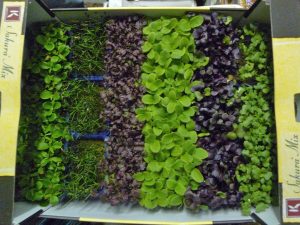 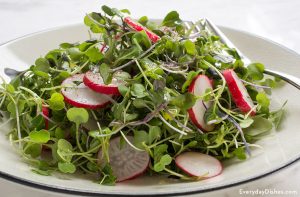 Setting up for growing microgreens

To start with, you need space, somewhere protected from swings in temperature, especially to the hot side. Also, it should be somewhere that you will visit every day. In Permaculture terms, microgreens are a zone 1 type crop. Many people use a garage, or if you have a large enough laundry you can use it. I use my existing Titan Shed. It is uninsulated, and I live in Queensland, so temperature control is a real issue. Gumtree is a great place to find cheap, second-hand, metal shelving to hold the seed trays.

You will need space for twice your estimated the weekly consumption. One area for this week’s crop, one area for those you are growing for next week. Most microgreens will give you a second shoot if you leave them in the soil. This also works to keep them fresher longer. With practise you will learn which varieties grow too much during the second week, and need to be cut at the right time. Leaving some varieties lets them get lanky, and stringy. My lovely partner’s favourite are snow pea shoots. These are a hardy, quick growing type. They come in a few varieties, but all tasted pretty similar to me.

As part of your setup, especially consider ventilation in the space. If it has anything less than a reasonably constant airflow, I would strongly recommend installing pedestal fans to push air across your sprouted microgreens. The density of growth makes microgreens particularly susceptible to stem rot, an evil fungus that will destroy trays of microgreens in a few hours. Maintaining airflow is an almost foolproof method of avoiding this issue. Pedestal fans are cheap and use minimal electricity. So they are a very efficient method of ventilating your growing area. Of course, there is the option of an insulated and climate-controlled room, but that is more in the advanced microgreens production field.

After you have set up the growing space you will need trays. I have found the standard nursery seedling trays work best. Around 200mm x 300mm is best as any larger and the tray becomes too large to handle, and the microgreens too difficult to cut. I would start with four trays: two for this week and two for next week. Wash the trays the same as you would for new seedlings. 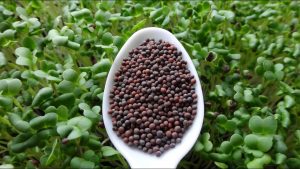 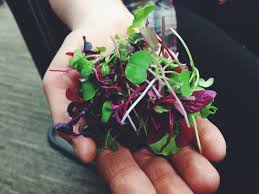 This is the the fun part. It is a fairly simple process and will be familiar to those that have grown seedlings before. 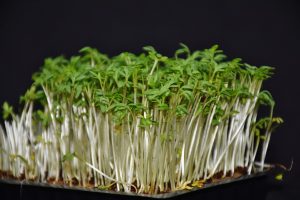 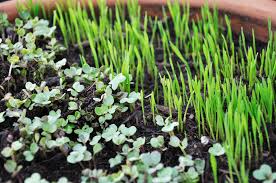